Star Gazy Pie is not something which you will see on many restaurant menus or even have heard of at all. If you travel to the fishing village of Mousehole on your holiday in Cornwall you can visit the place where it was invented. 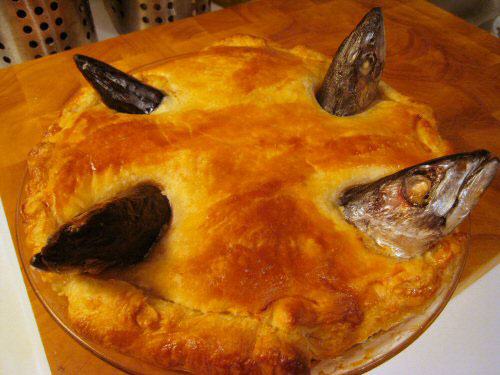 A story is told of how in 16th Century a brave fisherman called Tom Bawcock saved the village from starvation. The winter had been a very stormy one and no fishing boats had been able to leave the harbour; the villagers who relied on fish had no food left.

On the 23rd December Tom Bawcock braved the storms and went out in his boat and caught enough fish to feed the entire village. All the fish were baked in a pie with head poking out of the top of the pie to prove that there were fish inside.

The 23rd December is now celebrated in Mousehole as Tom Bawcocks Eve, a huge pie is made and paraded with lanterns before being eaten.