Moonfleet Manor: a luxury family hotel, only metres away from one of Britain’s great geological landmarks – Chesil Beach.

UrlaubCornwall visited Moonfleet Manor Hotel in Dorset to experience one of Southern England’s best hotels and take in the spectacular scenery.

From our room on the top floor, the views of the Chesil’s long pebble beach and down to Portland are unrivalled by any other hotel in Dorset. Chesil Beach is part of the Jurassic Coast, whose unique geological conditions have created some world famous landmarks such as Durdle Door and Lulworth Cove.

At Moonfleet, you are only a few miles from Weymouth, which will be hosting the sailing events for the London Olympics in July and August 2012.

Back at the hotel, the history of Moonfleet Manor and the old British Empire is all around you on the walls and furnishings of the grand Georgian house. 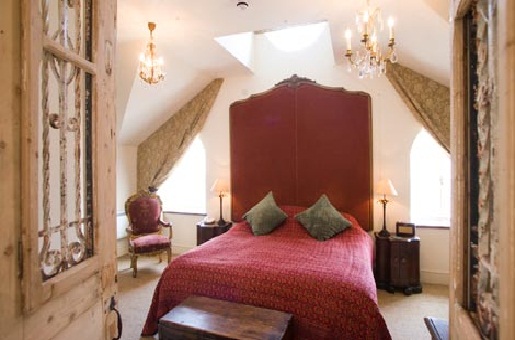 There are plenty of modern features to keep you and your family both relaxed and busy for your whole holiday. Children of all ages can use the climbing frames, games consoles, new cinema room (Summer 2012), table tennis and much more, while you relax in the newly furbished spa and treatment rooms.

The excellent food and can be served at various times ; whether that is early dinner for the kids and quiet fine dining for you later or a family meal on the terrace overlooking the sea.